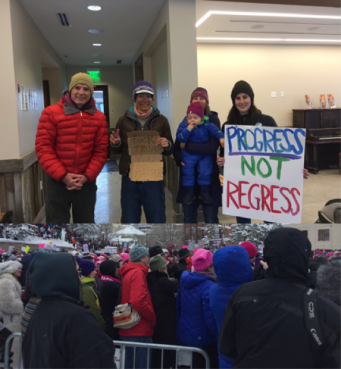 In upper photo, Shawn is on the left.

So many Goddard students and faculty participated in the January 21st Women’s March in marches across the country. This series highlights some of those marches, starting with Shawn Crawford, a Social Innovation and Sustainability student concentrating in Transformative Language Arts. Here’s his account:

Another snowy morning.  Saturday 21 January 2017.  I just want to sleep in.  It had snowed every day since 5 January.  8 feet of snow.  I had organized and committed to a dozen or so people in support of the Women’s March in Park City, Utah.  I also committed myself to show up in support of my grandmother, who marched on DC in support of her son during Vietnam, my mother for gifting me compassion and empathy, and to my daughter for guiding me every day.  Each deserving the respect and dignity the new President seemed unwilling to give.   We showed up with several thousand others, in community, in support of women, of all.  ~ Shawn Crawford, Women’s March Park City, Utah