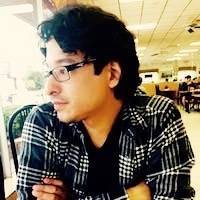 I came to Goddard through an alumni who was in his last year of the Individualized M.A. program in Consciousness Studies. We were good friends and discovered each other online—both of us were active “vloggers” or YouTube bloggers circa 2008-9. I was excited to learn about the IMA offering and interested in Francis X. Charet’s background in depth psychology. I was also really excited to discover a program that emphasized “self-directed learning” and curriculum developed around the needs of individual students.

All this sounded very academically engaging to me—a lot like how doctoral programs are—so I took a leap and went for it. I ended up doing most of my research on the intersection of media studies, transpersonal theory, depth psychology and cultural studies. I wanted to understand the impact and role digital media and the internet have on social transformation, because I believed—and still do—we’re living in truly, radically transformative times. Different communities and scholars are possessed by new ways of, to borrow from Goddard’s line, “doing-being-knowing” in the world; new blockchain technologies, new peer-to-peer philosophies, a surge diverse and empowered identities, and a rediscovered sense of stewardship with the planet’s ecosystem are all part of this emergent thought. We’re awakening to all this, and it’s tremendous, and there are so many ways to approach this unnameable planetary preponderance. Consciousness Studies, as a field, is multifaceted enough to begin to wrestle with these questions. For my part, I was drawn to the question of how digital networks and media studies viewed from transpersonal and psychological methodologies could inform us. I learned a lot, and I’m still learning.

I’ve been working with a few colleagues on an online, collaborative platform called Theory of Everybody. It’s an experiment in enacting a lot of the ideas I’ve been studying for the past eight years or so in that it will be cooperatively owned, trying organization models that aren’t so bureaucratic. So far, we’ve launched an online book club, #LITGEEKS, a discussion platform, Infinite Conversations, a podcast network by the same name, and a literary consciousness journal called Metapsychosis. They’re all connected through the discussion forum, and we hope as more people come aboard they’ll launch their own projects. The journal’s subtitle is “consciousness, culture, and planetary thought.” The whole idea behind it is to bring together,—similar to my experience with Goddard’s pedagogical approach—rigorous scholarship with artistic expression. We want to build a place where the transpersonal and spiritual have a place alongside the academic, and the pop cultural. A place where we can look at, reflect, and creatively respond to global issues like the economic crisis or the whole notion of living-and-dying in the Anthropocene, the age of immense, possibly irreversible climate change. So, the journal is inviting artists, scholars, poets, of all kinds to submit their material. Especially Goddard students and Faculty. Right now, with #LITGEEKS, we’ve just finished up reading The Saddlebag by Bahiyyih Nakhjavani, a British-Persian novelist. It’s a wonderfully written story about 9 travelers on the road to Mecca and Medina, and it explores themes like mysticism, nature, and spiritual transformation. Next up we’ll likely be exploring an eclectic array of authors—Philip K. Dick, Murakami, Delany, perhaps others. If Goddard students have time between packet work, they’re welcome to join in!

I’ve taken from my Goddard education this idea that you have to take knowledge with you out into the world. You can build your life with the foundations of your studies, and your studies are complicit, implicit with your life, your art. That’s why I’m involved in projects like Theory of Everybody, or previously, with Reality Sandwich magazine. I want to create spaces where education, knowledge, art, even the edges of the “weird”, the transpersonal, converge upon each other. It invites participation from the whole, infinite, mysterious person. I believe that publishing, writing, and acting from this space changes culture. At least the culture within arm’s length, but that’s where transformation starts.