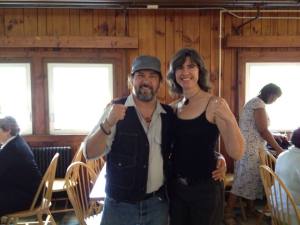 “So hello everyone, my name is Robert Muller-Moore IV. Everyone calls me Bo, the Eat More Kale Guy, Bo because I couldn’t spell anything longer in kindergarten, and “Eat More Kale” because I’m the owner of a micro-business called EatMoreKale.com. I print and sell hand-printed shirts that simply say, “Eat More Kale.” That’s how Bo Muller-Moore began his keynote address to the August graduation of Goddard Individualized MA, Health Arts and Sciences, and Sustainable Business and Communities program.

Starting with his own story of landing in Vermont in 1998 with “no local references, no job, a southern accent, a 125-pound rotweiller, a black cat, and 25-year-old python named Mickey” and after growing up in Memphis, TN. You can watch his fascinating story right here.

While the t-shirt business was pleasant enough for him and his son over many years, eventually Bo found that continuing to do what he loved meant standing up to corporate bullying, brought on when he simply filed to copyright “Eat More Kale” on his t-shirts. His copyright request was blocked by none other than Chick-Fil-A. He decided to fight back, and found many kindred spirits, including the governor of Vermont, the founders of Ben & Jerry’s, and many others promoting and running small businesses across the country. As a petition now signed by over 41,000 people states,

Bo’s story of finding his calling, his livelihood and his community, and now finding his voice as “an accidental activist” moved and inspired everyone at the graduation ceremony. Learn more about Bo’s business here, and his fight to save his business as well as others threatened by unethical corporate practices in the Huffington Post, and in the Economist.