Helping Teens Empower Themselves Wherever She Lands: Heather Davis 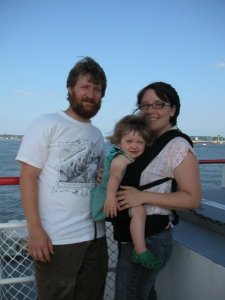 When Heather Davis was in the Individualized MA program (Transformative Language Arts concentration), she focused on how spoken word performance and writing could help at-risk teens find their feet and walk toward better lives. She didn’t realize at the time that she would be aiming her own two feet around the country, starting up projects for teens to empower themselves.

While she did her practicum in New York City, she soon moved to Austin, Texas, where she co-founded an affiliate of 826, a non-profit focused on empowerment through literary. The Austin Bat Cave now has several staff people, vibrant community support, and offers after-school, in-school and other programs such as music writing, gender identity exploration, filmmaking, hip-hop poetry, college essay writing and making literary journals.

About three years, pregnant with her first child, Heather and her husband decided to move to Portland, ME to be closer to their families. Once she arrived, she discovered the Telling Room, which was modeled after the 826 program, and she showed up on their doorstep. “They needed someone with my skills, so I started coordinating volunteers and grantwriting, and now I

work on fundraising, grantwriting and future program development.” She’s currently raising funds to launch an after-school program for refugee and immigrant teens from the war-torn, impoverished countries of Sudan, Somalia, Iran, Iraq and Afghanistan who have settled in the Portland area. “Schools have a limited ability to serve these kids because of budget cuts,” she explains, and furthermore, the kids have just come through horrendous losses as well as dislocation. “Some of them had their parents killed and all kinds of things. We help them tell their stories and also find emotional support, and the academic and literacy component they really need.”

Looking back at Goddard, which she graduated from in 2005, she says, “I went there knowing I wanted to do something in the education world and writing world, and it all clicked. Before I came to Goddard, I wasn’t really part of any serious discussion about how to do the kind of work I wanted to do. The emphasis on right livelihood helped me move beyond the 9-5 capitalist worker bee mentality. The freedom of the individualized program let me design exactly what I wanted to do.”

In addition to living out her own right livelihood in Portland, she’s also joined a writing group with several TLA graduates, and she’s taking writing workshops to work on a book about the six months she lived in a teepee in the desert, another place her feet took her.

3 Responses to Helping Teens Empower Themselves Wherever She Lands: Heather Davis